If you are a corporate type, I am sure they have already bored you to death with Abraham Maslow’s human need pyramid.  Maslow proposed that human beings start addressing their needs from the bottom most layer.  Typically, after the bottom layer is addressed, they move to the layer above.  How-much-ever popular Maslow’s pyramid is, I can never figure out what self-actualization is!

Fortunately, there is a delightfully alternative human-drive model that works for me.  Proposed by David Rock, the SCARF Model identifies five human needs that have huge impact on our decisions.  And it is not as if one of them is more important than the other. 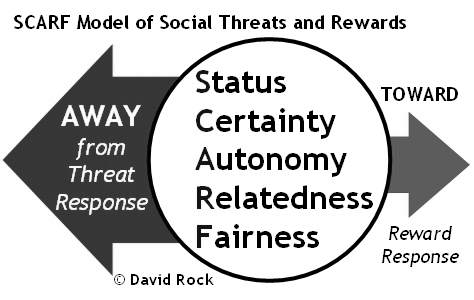 Maslow and all other teachers before him (including the religious teachers) completely missed the human hunger for status.  Almost every religion, without an exception, preach that status seeking is evil or trivial thing.  People readily die in order to retain their status.  In fact, almost every one is spending their whole life pursuing status.

With the help of modern science, animal studies and hard data, we now clearly know that having high status adds a few years to one’s life.  Not only that, we now know that the people/animals with lower status suffer much higher levels of stress and anxiety, making even their shorter life much less pleasant.

Religions are a product of group selection.  They almost always put the benefit of the group above that of the individual.  Religions always belittle an individual’s self-centered reward seeking behavior.  Ironically, religions smuggle an individual’s reward-seeking mechanism to serve the group.  If we look at it from this point of view, a religion is a parasite on its member, though a mutually beneficial symbiotic relationship with the host might exist.

5 thoughts on “Seek Status. Be Happy.”