The current treatment protocol for chronic acid-reflux is a crime. To understand why, you will have to first understand how this disease works.

All posts in this series 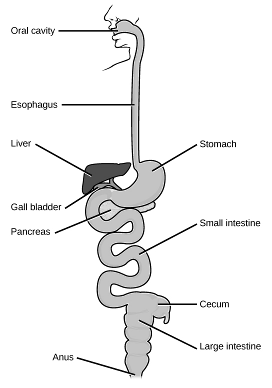 The food you swallow travels through a vertical tube called esophagus. Esophagus takes the food into your stomach, where the stomach adds some acid and grinds the food. The acid helps to break down the food and extract nutrients.

Up until recently, we used to believe that large intestine is largely a waste-bin, holding the digested food till it is excreted. Now we know better. Bacteria living in the large intestine breaks down and eats up our left overs like the fiber that we eat. After the bacteria has done their job, even more energy energy is released (about 30% more) for us to extract from the food.

After the energy extraction, the remaining stuff, with whole lots of stomach bacteria, are stored to be excreted out of the body.

Between our chest and the abdomen, there is a horizontal plane of muscle called the diaphragm. Lungs, heart and esophagus (food pipe) sit above the diaphragm. Stomach, intestines, gall bladder, liver, spleen, pancreas, kidney, urinary tract, etc., sit below the diaphragm. 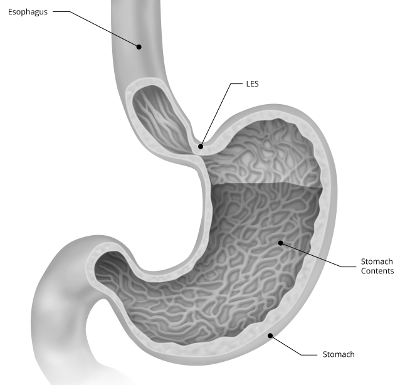 This pinch cock is called the Lower Esophageal Sphincter valve (or LES valve). When it doesn’t work well, acidic content of the stomach flows back into the esophagus. We call this an acid reflux.

Since the esophagus doesn’t have the protective inner lining like stomach, if the acidic stomach contents flow back into the esophagus, the inner surface of the esophagus gets hurt. If the hurt continues for a long time, we are talking years, it might turn into esophageal cancer.

Esophageal cancer is the fastest growing cancer in many parts of the world, including India.

So, there is a sort of compulsion to reduce the damages of long standing acid reflux.

At times, there is surplus of pressure in/on the stomach which pries open even a normal-strength LES valve and pushes the food back into the esophagus. This is another mechanism through which you might end up getting an acid reflux disease.

Here is the list of all the things that can make the contents of the stomach to flow back into the esophagus:

Let’s see what we can do fix each possible causes of acid reflux.

Other than these, all backward stretching yoga postures stretch the esophagus. It is believed that with the increased length of esophagus, the lateral pressure on the esophagus increases, shutting it more effectively.

Did you notice that none of the above fixes involve reducing the stomach acid?

Stomach acid is there for two good reasons:

Stomach acid keeps the bacterial content of the stomach acid in check. With weakened stomach acid, there is an over-growth of bacteria in the small intestine. We call this a Small Intestinal Bacterial Overgrowth, or SIBO.

Note: SIBO has many causes. Reduced stomach acid is just one of them.

SIBO has many nasty effects. They include:

SIBO is also very difficult to treat with antibiotics, with very high rate of recurrence. When a recurrence happens, the symptoms are worse.

Let’s look into on only one ill effect of SIBO: Bloating. The bloating occurs because of improper digestion, particularly food fermentation in the small intestine. The gas generated in the process, which causes the bloating, also causes belching.

Opening the LES valve, we already saw, causes acid reflux. So, when the stomach acid remains sufficiently low for a long time, we are talking months, SIBO to set in. Once SIBO comes to play, it contributes to acid reflux.

If you already have acid reflux, SIBO makes it worse.

Again, there are other reasons for a bile reflux. SIBO is just one of them.

When the bile, which is alkaline, enters the stomach, it neutralizes some of the stomach acid, making the problem worse.

Now that you have your fundamentals, let me take you to the meat of this post: If you have acid reflux and go to a doctor, what do they do? They give you acid-blockers! So that when the stomach contents flow back, your esophagus isn’t burnt the way it used to be. Let me paraphrase that:

Acid-blockers don’t stop the reflux. It simply stops the acid.

Acid blockers, when taken for a long period of time, give you malnutrition, start SIBO and make the acid reflux symptoms worse. Acid blockers turn evil when the treatment runs into months and years.

Here is something that no one probably told you about:

If you have acid reflux, the real damage to the esophagus is done by the pepsin that comes from the stomach!

Pepsin is a molecule that is used by the stomach to digest the protein we eat. But pepsin becomes active only in the presence of acid. When you have a reflux, along with the rest of the food contents and acid, even pepsin rises into the esophagus. When the reflux subsides, some of the pepsin hangs around on the walls of the stomach and lies dormant.

Since you now already have pepsin on the esophageal walls, if you happen to eat acidic food or drink acidic drinks, the acid in your food wakes up the pepsin and it starts to digesting your esophagus. Acid reflux is more about pepsin eating into your esophagus and less about the acid burn.

Let me repeat it:

Acid reflux is more about pepsin eating into your esophagus and less about the acid burn.

To reduce the reactivation of pepsin, you have to be careful not to eat or drink acidic foot.

When it comes eating less acidic food, how much is too much?

The acidity of substance is measured on a pH scale. pH “0” is very acidic (battery acid). pH 14 is very alkaline (drain cleaner). Lastly, pH is a log scale. “pH 0” is…

Now that you understand the pH scale, here is something you are never going to forget:

Coke and Pepsi are almost as acidic as the stomach acid. So are many packaged drinks that we use every day.

If you drink acidic drinks or eat acidic food after you have had a reflux, the residual pepsin lingering in your esophagus will get reactivated and start gnawing into the esophageal tissue.

If you are suffering from acid reflux, high the pH of the food you eat lesser you activate the pepsin clinging on to your esophagus.

If you have acid reflux, start eating food that has higher pH value than 5. Do this for two weeks and then stick to pH 4+ food for rest of you life.

With this, about 1/3rd of the people with acid reflux can wean themselves off acid-blocking medication. What more, to keep the pH as high as possible, you will end up eating large quantities of high fiber vegetables, which are excellent for your gut microbiome. So, when you are on high pH diet, you can effectively rule out SIBO.

About 1/3rd of the people with acid reflux can manage with high pH diet and medical intervention. However, the rest 1/3rd typically need surgical correction of their LES valve.

has been advising patients on high pH Indian cuisine for controlling their acid reflux.

I started this post with the sensational claim that current standard protocol for “treating” acid reflux disease is a crime. Now that you have the complete picture, are in a better position to understand why:

Whoever perpetuates this broken system, in my humble opinion, is committing a crime.

We already saw that prolonged usage of acid blocking drugs damages the gut bacteria balance, resulting in Small Intestinal Bacterial Overgrowth. Often, these patients are put on antibiotics to get rid of their SIBO. If these things mess up the microbiome so the person starts have symptoms of autoimmune diseases like IBS, allergies, etc., they are also put on steroids to lower the immune response.

This is a deadly cocktail designed for disastrous dysbiosis.

Unless someone wakes up to this and starts to work on re-balancing the gut microbiome, this patient will never become healthy again. Ever.

All posts in this series