If you are doing some business in neuroscience industry, you will find this somewhat interesting. If not, I can’t possibly imagine why would you spend time reading this.

For a few years ago, I read nothing but books on brain science. I have an unique brain that works nothing like normal brains. The key to getting control of my life depended on my understanding my own brain. With time, I graduated to reading neuroscience books written for medical professionals. From there, reading medical books on other organs was just a hop.

When I got an opportunity to work on healthcare a couple of years ago, I took it up with great gusto. It was an opportunity to bring to practice several elegant solutions that I know are available, but for some mysterious reason, hardly anyone practices. But it is easy to underestimate the inertia of medical industry.

Things got a interesting a couple of months ago: I co-founded an organization called Chennai Neuroscience Foundation (since exited) which works exclusively on neuroscience. Though I would loved to have started with biohacking and cognitive enhancement, the business compulsions have it that we start from the exact opposite end.

When building the business model for CNS, I realized that the entire neuroscience industry falls into a four layered pyramid 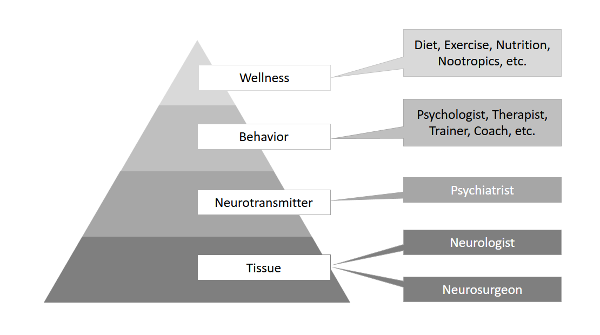 Bottom-most Layer: Neurosurgeons and Neurologists work on anything that goes wrong with the tissue of the central nervous system and its blood supply.

Second Layer from Bottom: Cells of the central nervous system communicate by exchanging electrical signals and chemicals. When the brain chemicals (called neurotransmitters) go out of balance, behavior issues like ADHD, OCD, Schizophrenia, Depression, etc., come popping up. A psychiatrist works on the brain chemicals. They try to balance the neurotransmitters as a means of curing us of mental diseases.

Though the electrical signal exchange is crucial for the function of the brain, we don’t understand it well. No medical specialty works on brain electrics. You might just find few doctors and non-doctors dabbling with brain electrics. The days of neuro-electric field is firmly in the future.

Second Layer from Top: Host of other professionals like psychologists, trainers, teachers, coaches, etc., work on the information content of the central nervous system. The information content include memory, fears, addiction, behavior, habit forming, creativity, logical reasoning, muscle memory, etc. Despite 100 years of psychoanalysis, there is much garbage to be thrown out. Novel techniques (like NLP and psychotropics aided psychoanalysis) are taking the pants off from archaic work horses like CBT. This layer of neuroscience is in for a major reboot.

Top-most Layer: The top layer of neuroscience pyramid, the wellness space, is where the charlatans and pseudoscientists roam. This is the least understood part of neuroscience, though it is going to create super-humans out us. Today, there is enough evidence based science out there to make some feeble attempts at neuro-protection and cognitive enhancement. Though it is not much, anything is better than nothing that we had  until now.

The deeper you go down the layers of the pyramid, the more education and training the professionals need.

As you go deeper down the neuroscience pyramid, the sicker the patients must be. And their sickness is more tangible.

Whereas, the customers on the wellness layer shouldn’t even be called a patient. They are already in their pink of health and they are looking for making themselves healthier.

Potential of Each Layer

All the life threatening conditions are addressed by the professional operating at the bottom most layer of the neuroscience pyramid.

The challenge faced by professionals operating higher up the neuroscience pyramid is with recovering the potential lost to mental health issues.

But the highest layers of neuroscience pyramid have the capacity to release immense human potential like we have never seen. At least, that is what we technology-optimists believe.

Today, economic activities in neuroscience industry are limited to the lower layers.