Laura Carstensen of Stanford had spent her life researching the state of mind of the elderly.  She and other researchers working in the field have come up with some eye-opening insights, which run completely counter to the conventional wisdom.

Contrary to the popular image of “grumpy old man/woman”, older people seem to be psychologically more stable!  Human brain seem to become more stable with age.  If an elder person is depressed, they are most probably suffering from what started when they were young.

Also, people who are neurotic seldom learn to become happier with age.  They often start from such a low baseline that any improvement in the inner happiness simply doesn’t muster enough force.

By the way, women of all age seem to be reporting more psychological distress than men.  It is not clear if this is due to self-denial that most men are known for.

Older people experience more positive emotions.  There are lesser threats in their lives and lesser uncertainties.  With age, sources of anxieties start decreasing, either because they have been resolved or because people learn to live with them.  Contrary to the popular wisdom, youth, it seems, is the most miserable period in one’s life! 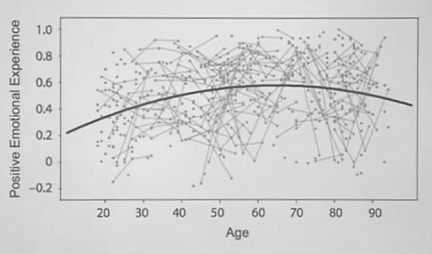 After about mid sixties, the number of positive emotions being experienced by a person seem to come down with age.  Part of it has to do with age associated impairment of health.  If so, with modern anti-ageing techniques, the dip will be postponed by a decade or two. Does it mean that the increase (in positive incidences) will continue for another decade or two is a different question. If the answer is yes, then age-extension programs will yield some of the happiest human societies we have seen till today!

There is a module in the brain called amygdala, which lights up (becomes active) when people encounter emotionally charged stimulus.  When researchers put younger and older subjects in a brain scanner and showed them emotionally positive and negative pictures, something very interesting came out.  The amygdala of younger subjects was activated when they encountered both positive and negative stimulus.  Older people had much bigger spike for positive stimulus than younger people, and they ignored the negative stimuli! 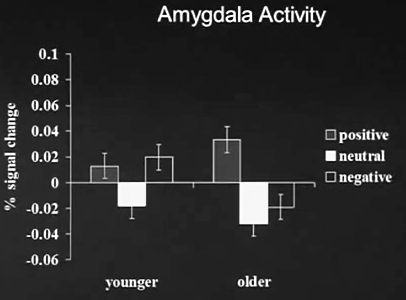 Older people have learnt to ignore the negativity.  At the same time, they have learnt to appreciate positive emotions better.  No wonder they are happier!  This has become more obvious through another experiments conducted by the researchers.  They showed younger and older subjects pictures of positive and negative faces and measured the amount of attention they paid. 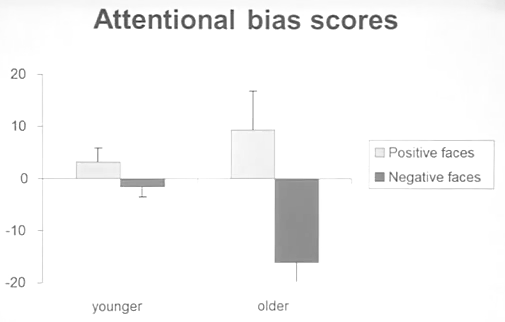 Older ones paid poorer attention to negative faces and paid better (than younger people) attention to positive faces.  It is as if the elders have become really good at ignoring negativity!  It may not always be a good thing (what good can it be if one ignores all atrocities in the news paper).  At least, it, makes them happier!

With time, emotional life of people becomes richer and more complex.  As people get older, they tend to retain the emotionally close and meaningful relationships and the casual relationships fall off. 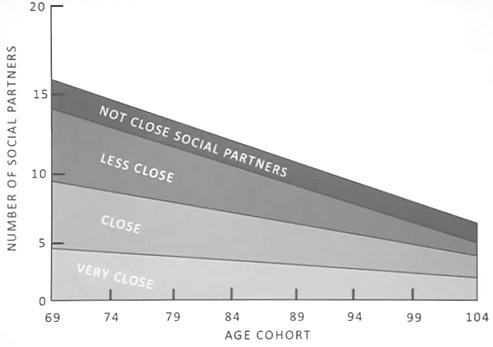 With age, people become more selective about who they socialize with.  The riff-raff, not-so-close, meaningless relationships dwindle in numbers.

In Laura Carstensen’s words, as people grow older, they tend to

From the teachers of positive psychology and the science of happiness, we know that these are sure recipe for lifetime of happiness.  Add to this a more stable brain, no wonder that people are much happier as they grow older (of course, we are only talking about healthy individuals, who are also financially self-reliant).

Even anecdotally speaking, when I look around, I see that everyone I know, including myself, is much happier now in the middle ages than we were in our twenties or thirties.  Carstensen must be on to something here!

To learn more about Laura Carstensen’s work, you can watch this Youtube video or read her book A Long Bright Future.